So last week we had a customer with a 2008 GSXR 600 send some fuel injectors he had purchased from Ebay. His bike was running rough and a mechanic had assured him a faulty fuel injector was to blame. Unfortunately neither of them knew about our fuel injector service and he bought another complete set of fuel injectors. I’m confident we could have serviced his original set, but he instead wanted to use the 2nd set but another friend said he should have them sent to us for inspection. He agreed, and a good thing he did.

Notice the 4th injector from the left. Most of the time we see increases in fuel flow rates after ultrasonic cleaning, but in the case of one of these gsxr600 fuel injectors,  it was not closing all the way while it was firing. This resulted in an about 20% more flow rate than AFTER the cleaning. This could have caused a rich enough condition to foul the spark plug and crate buildup on the piston top and the valves. Excessive carbon build up on the tops of pistons can increase the compression ratio enough to case pre-ignition or “ping” that is very damaging to engines. And the rest of the uel injectors were flowing considerably less than they should flow. 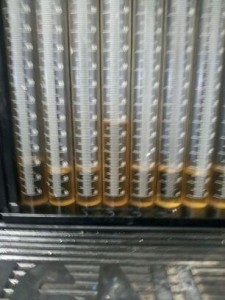 After ultrasonic cleaning these in the ultrasonic cleaning tank multiple times (while the fuel injectors are being fired and backflushed) the set came around to within a few % of flow of one another. (We normally charge extra for the additional time needed to service problem injectors as we have to check flow and spray pattern after each cycle of cleaning). On a gsxr600 the lower injectors flow slightly less than the upper injectors. Unlike a 2008-2013 Yamaha R6 that has even flow rate of the 8 injectors, even though the Yamaha upper and lower injectors look very different from one another. As noted above, the 4th injector from the left came DOWN about 20% during a 30 second flow cycle, and the others came UP about 20%. Had these been installed on the bike, it is unlikely it would have ran, or if it did, it would not have run very well. 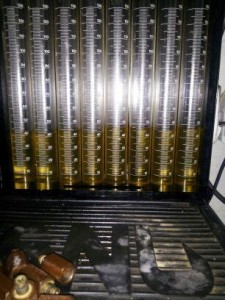 Needless to say, it is a good thing this customer did not open the box when it arrived, and instal the “new to him” fuel injectors as he would have had more problems that he started with. It is important to service fuel injectors once a year for optimal performance, especially if the machine sits for weeks at a time between events. For daily drivers, if you notice a drop in gas mileage, hard starts, or rough idle and running, send your fuel injectors to ProFlow Technologies for fuel injector cleaning and service.